The Praga district (the Eastern part of the city) offers a complete change of a urbanscape for people familiar with the Warsaw’s city centre with its reconstructions and new architecture. This is a piece of the Polish pre-war capital city when the religious and ethnic situation was different. During 2 hours walk in Praga you can see that original  Jewish prayer houses, the Orthodox Cathedral and the Roman Catholic one – they are all located in a very close proximity and very near the district market place called Bazar Różyckiego. 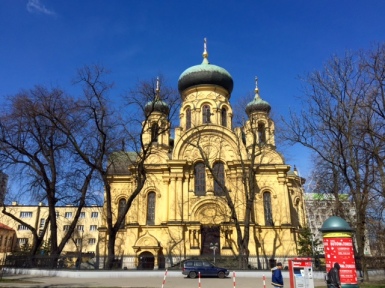 The Jewish heritage sites located in the Prague districts are mostly linked with every day life of the pre-war Jewish Community in Warsaw, for instance the Auxilium Academicum Judaicum student house where Menachem Begin lived while studying at Warsaw University. There are two small Jewish prayer house you can visit (today a part of the Praga Museum) as well.

Last but not least, visiting Warsaw Zoo and an original hideouts where many Jews found a safe haven during WWII can be an absolute highlight of you stay in Warsaw. It is an original, pre-war villa and home of Antonina and Jan Zabinski (the director of the Warsaw Zoo), who were helping Jews as  members the Polish Resistance. This is actual true story behind “The Zookeeper’s wife”: a novel and a movie.

There is an entrance fee to Praga Museum – a local historical museum of the district, and the prayer house entrance is included in the Praga Museum ticket.

There is an entrance fee to the Zoo and the Żabiński family’s villa. The visit may be arranged in the mornings only and it will take approximately 1 hour.