Peacocks, squirrels and gondolas… you will find all that, and more in Łazienki / the Royal Baths of Warsaw  or Park Łazienkowski. These names are given to one place that is considered the most magical in Warsaw. This is a common belief shared by the local people and visitors. So, what is all the fuss about?

The Royal Baths of Warsaw is a complex of gardens and villas created originally in the second half of the 18th century for the Polish king Stanisław August Poniatowski. Today it is 76 hectares of greenery in the city centre and (at least) three different gardens, so even a short walk is like a live lecture on the history of landscape architecture.

The oldest part is called the Royal Garden and it was created in the 18th century, then there is the Romantic Garden (the 19th century). The 20th century Modernist Garden is the most famous and photographed part due to the Fryderyk (this is the Polish spelling!) Chopin Monument and summer piano recitals. There is also a Chinese garden – the newest addition to the Łazienki complex designed following the Prince Kung’s Mansion in Beijing. 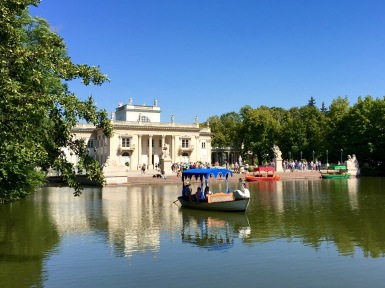 Łazienki: Palace on the Isle

Mind you, we are talking about the major attraction in Warsaw with a very busy cultural calendar full of concerts and events: the Chinese lanterns festival or Chopin recitals are just the most famous ones. The Polish Tourist Organisation recorded that in 2013 Łazienki were visited by a little over than 2 000 000 people and the survey showed the constant increase in number of visiters in 2011-2013. Sometimes, especially on spring or autumn weekends, finding a secluded spot can be really challenging.  Monday to Friday are much less busy. Alternatively,  you can decide to visit the royal villas as most visitors focus on the gardens.

All the greenery is just a part of Łazienki as there are several royal villas to visit. The main one is called the Palace on the Isle (in Polish: Pałac na Wyspie). Then, there is the White Pavilion and the Myślewicki Palace.What is more, the king was renowned for his vast cultural interests and this is why you can find two theaters in his park: the open-air Amphitheatre and the elegant, wooden hall that was arranged in the building of the Old Orangery. All in all, you can stay here all day or come for a short walk, but it is an absolute must see in our city.

Last but not least, the red Łazienki park squirrels! We call them: Basia (short for Barbara) and we feed them with nuts. Mind you, they are friendly, sometimes even too much, as they are known to climb your legs instead the trees. It may happen especially early in spring or late in autumn when there are not to many visitors and they want to be given their treats.

Looking for a guided tour? Book my tailored made Łazienki tour!