How about a walk in the southern part of what we call Śródmieście (Midtown)?

During this 3,5-hour walking tour you will have chance to both learn a little bit about the city’s past and soak up the atmosphere of the modern-day Warsaw. We leave from the hotel to admire the Palace of Culture and Science at the very heart of the city as well as note the contrast between the pre-war and post-war urban development walking along the Wiech Passage, and the communist high street, Chmielna, up to a major artery of the historic Warsaw, Nowy Świat. Here we will explore the contrast between the trendy restaurants and bars of Foksal Street and the backyard communist pavilions that now group over twenty pubs and bars as well as boast some fine murals. 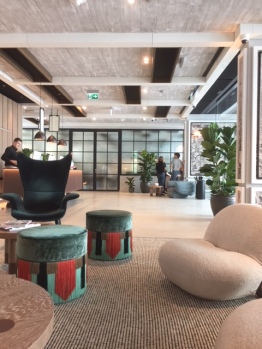 Kora: mural contribute to the Polish rock and roll legend

Strolling past the famous contemporary landmark of the plastic palm tree on the intersection of Nowy Świat and Aleje Jerozolimskie we will see the Polish Communist Party Headquarters and the Censorship Headquarters which has now become part of the most trendy fashion and design shopping area in the capital. Then we will follow Mokotowska Street, today’s high street that has also become the hub of the Polish fashion and design. Our next stop is the Konstytucji Square, the first Social Realist housing estate in Warsaw which proves a marked contrast to the elegance of 19th -century tenement houses of Aleja Róż and the Ujazdowski Park.

Tucked behind this is another relic of the Communist Era, a settlement of the wooden Finnish Houses –  today a home to a number of non-governmental organizations, urban gardeners, beekeepers and cooperatives. We finish the tour at the Ujazdowski Castle, Centre for Contemporary Art which also houses two excellent restaurants. From here you can walk on to the Łazienki Park with the Chopin monument and a number of architectural gems such as the Palace on Water, or retrace your steps to the hip Zbawiciela Square with its numerous bars and restaurants.